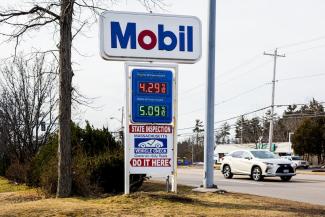 One of the themes for the mid-term elections is inflation.  Republicans are blaming  Biden and Democrats for inflation.  Good political strategy, but does it make sense?

First of all, I am not surprised one bit about current inflation.  My only surprise is how long it took to get here.  At the end of 2021 I wrote a commentary/blog on inflation potential.  Earlier in 2021, I led a class for OLLI [an adult education affiliate of U of AZ] on inflation.

If you look at the causes of inflation, you will find one cause is the demand for goods and services exceed supply.  This can be from consumers having more cash to spend increasing competition for goods, a breakdown in the supply chain reducing goods, or a combination of both.  Another cause is an expanding monetary policy which pumps cash into the economy in one form or another.  During the pandemic, we had all three take place.

The above is all true, but what leads up to them.  I would suggest inflation has been inevitable for several reasons.

One, increasing federal deficit.  From 2000-thru 2020 the Federal deficit went from $5.7 Trillion in 2000 to $27.2 Trillion at the end 2020.  During this twenty-year time period Republicans controlled the Presidency, 12 years, the House, 14 years, and the Senate, 10 years.  [For two years the Senate was divided equally between the parties.].

Two, tax cuts.  During the above 20-year time period when Republicans cut taxes or revenue.  When a household or government cuts taxes and increases spending, it never is going to end well.

Three, pandemic.  As stated by the author of the "Black Swan Event" Nassim Nicholas Taleb in a paper he co-authored on January 26th, 2020, warned the coronavirus could lead to a pandemic.  In an interview, he was quoted as saying governments “did not want to spend pennies in January; now they are going to spend trillions.”  In fact, the US under Republican leadership did spend trillions all coming from deficit spending.

Four, war in Ukraine.  Most us know former President Trump called Russian dictator Putin a "genius" for his invasion of Ukraine.
US intelligence agencies concluded in 2016 that Russia supported the Trump candidacy for President with a state authorized campaign of cyber attacks and fake news stories planted on social media.  Trump also said "I knew Putin very well. I got along with him great. He liked me. I liked him".

As an independent moderate, I have not nor ever will belong to a political party.  I do not believe that inflation is solely a Republican problem.  There are a lot of factors which have contributed to the current inflation rates.  However, individuals who vote Republican thinking this will be the magic formula for ending inflation are ignoring twenty-plus years of history.

For the record, I would suggest the steps to reduce inflation are already in place, increasing interest rates along, decreasing money supply, and improving supply train.  For example, average 30-year mortgage rates are about 7% today up from 3.27% at the beginning of the year.

Who ever gets elected to Congress will have zero effect on inflation short-term.  Long-term if Republicans get control on Congress and in a couple years the Presidency, I suspect they will do what they have done the past twenty years, increase spending, cut taxes, increasing the federal deficit and send the bill to our children and grandchildren.

Today's inflation is a result of political party mismanagement for the last twenty-plus years.  Repeating the same mistakes will not solve the problem, but accelerate it.