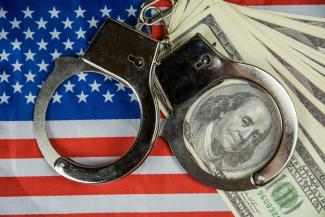 You live in a city or town that you really like, but there are problems.  The infrastructure is in dire need of repair.  Both the water system and electrical grid are very old and have regular problems  The school system is underfunded, class rooms are overcrowded and school supplies are short.  Health care is limited and expensive.  Crime is increasing, but the police force is overworked and under paid.  There is no initiative to address not to mention solve community problems.   Finally, the community has suffered two natural disasters in the last five years and not only have no repairs been made from the last one, but even more important there has been no planning for the  next one.

So you plan to attend a city commission meeting.  Before going, you do some research and find out the majority of the city commissions have pledged to never raise taxes to address city problems.  The reason or more accurately, the bribe, was an individual had told them thru intermediaries, that their political career was over if they did not sign the pledge.  Adding insult to injury, the individual requiring the pledge was not from the community, or even from the same state.  The individual, an old white male, [go figure], knew nothing about the community, its beauty and its challenges.  He simply did not care.  All he cared about was no new taxes.  And because he was rich, and had access to other rich people, who were political donors, he forced them to sign the pledge.  Its legal, mostly, but really a bribe.

Sound preposterous,  But its all true, just slightly different.  Before the 1986 National Election a wealthy donor and influencer of what I fondly call, as an independent moderate, the "borrow and spend" party, suggested, [forced] all Party candidates to sign a pledge to not increase taxes.  Almost all did and the pledge continued thru ensuing elections.

So how has that worked out for the US.  The Federal deficit, from 2000 to to 2020 went from $5.7 Trillion to $27.5 Trillion.  During that time period, the borrow and spend party controlled both parts of Congress and the Presidency the majority of the years.

Cutting taxes and increasing federal spending is the equivalent of a family household cutting their income, increasing their spending by using charge cards and not paying either the interest not to mention principal at the end of the month or year.

I often wonder where we would be if the "borrow and spend" party had focused on al of the following.

The above are just a few examples, there are many more.

I truly believe that anyone running or serving in Congress should only accept political donations from individuals who can vote for the person.  If fact, I believe this should be a law.  Accepting money or making pledges to outside sources is the same as a bribe in my estimation.

Finally I am not saying the tax and spend party has all the answers, but at least they understand if you increase expenditures, it is necessary to increase revenue.    This is a pledge they never should have made.  Our country has lots of challenges.  Elected officials job is to address and solve problems, not make pledges that not only negatively affect our country's financial security but all of us citizens.