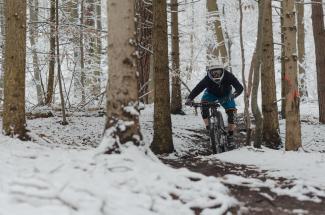 I was at the top of the pass looking down at about 4-6 inches of snow on the route.  Now if I had been on downhill skis, it would not have been even close to enough snow for me to consider going down.  Even if I was cross country skis, I would have bailed.  But I was on my road bike and I was at the top of Donner pass on a bicycle tour in early June.

I knew the few cyclists in front of me were already down before the snow hit and the group behind would take a while to get there.  The snow was pristine except for one set of tire tracks.  So off I went on a road bike with skinny tires staying on a set of car tracks going down switchbacks at 20+ mph.  Obviously, I made it, or I would not be writing this.  More than once going down I thought to myself, this is really not a good idea.

Recently I have been comparing this experience to the first time I skied the Bowl in Big Sky, MT.  It was towards the end of my second winter of skiing and as I have mentioned before, I started the sport older than average, closer to 60 than 50.  The reason I did the Bowl was peer pressure from some family members and friends.  Yes, peer pressure never stops, it just comes from older people.  They told me I probably would be fine.  Probably being the operative word.

Got off the lift following in another skier’s tracks looking for an easy place to start my descent.  I quickly realized there was no easy place to start by my standards and it was time to go.  I made it and did not fall once, though I do remember doing an Olympic-level pirouette.

I have been thinking recently about the two experiences.   When I got to the bottom of Donner Pass, I considered biking back up and doing it again because it had been so much fun, but I still had 30+ miles to go that day.  On the other hand, though I did the Bowl many times afterward, the first time I was just happy to get to the bottom with various body parts still in all the correct places.

The rewards are obvious in both scenarios.  Though there were risks in both activities, I would argue the risk level was higher on the bike descent.  If got of the tire track and lost control on a switchback, it could have become ugly pretty quick.

Before going further, it is important to note, I am anything but an adrenaline junkie.  In both scenarios, I thought I could do it.  At the same time, I try and be cognizant that most of us occasionally write checks with our minds, that our bodies cannot cash.

We are always making risk/reward decisions.  This is true in many outdoor activities and especially true for outdoor activities in the mountains.  It is also common to consider risk/reward dynamics when making various types of financial decisions.  Though many of us do not think about it, I would suggest we are often making risk/reward decisions in all parts of our personal lives.  Whenever we make a decision, though sometimes subconsciously, we consider the benefits and the drawbacks or in other words, risk/reward.

I would also suggest it is not only important but necessary going forward to think in terms of risk/reward when electing both state and National leaders and evaluating their policies.  Too often, in today's polarized world, it is common for followers to defend their leaders without ever evaluating the benefits and drawbacks of the leaders’ policies, both short-term and long-term.

I truly believe we are in a new normal and not re-thinking how we make long-term decisions as a society makes about as much sense to me as trying to go down the Bowl in a February on a road bike.