Self-Insulating, Past Heroes, and Electricity 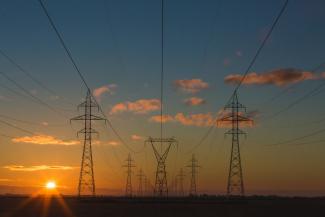 Self-Insulating, Past Heroes, and Electricity

I do not remember being cold on the farm.  I do not remember being warm either.  I have often wondered if the reason for this was I was self-insulating.  My mom used to tell me I was husky which was her way of describing her less than slim son. In retrospect, I think I was just protecting myself from the cold.

I do remember a coal furnace.  That was our form of heat on the farm.  We did have electricity though I am not sure when we got it.  I think before I was born, but frankly, my memory from ages 0 to 3 is a little fuzzy.  I never think about all the benefits of electricity unless the power has gone off which is rare, but over the years has happened a few times.  Then I think about the loss of heat, water heater, lights, refrigeration, cooking, television, and most important in today's world, the internet.

Today we take electricity for granted, however, that was not always true.  Electricity did not come to major cities until the late 1800s which is an interesting story by itself.  But even more interesting is how electricity came to rural areas like the farm on which I lived in NW Minnesota.

According to a December 19th, 2019 article in Rural Electric Magazine, in the early 1930s, Holmes Maclay, who owned a ranch about twelve miles from Lolo, MT.  Maclay understood the benefits electricity would bring to rural life and asked the Montana Power Company for a quote for power lines to his ranch.  He was quoted $10,000 per 1,000 feet of line. That's a lot of money by today's standards, now think about it in the 1930s during the Depression.

With the passage of the REA, Maclay and others formed the Missoula County Electrification Association with the first stockholder meeting taking place on Jan. 5, 1937.  At a subsequent stockholder meeting in late March, Maclay was elected president of the board of directors.  This all led to a  total of 75 miles of lines were energized in 1936 reaching 125 initial stockholders who lived in rural areas.

According to an article on July 7th, 2014 in the Great Falls Tribune, a few years later In 1945 Anna Dahl, a teacher, a mother of five whose husband was a farmer, went to Washington, D.C. delivering the paperwork for a federal loan for a rural electric cooperative which led to the Sheridan County Electric Cooperative.  In 1946 600 families in northwestern Montana now had access to electricity,  Dahl went on to be the cooperative's first secretary and then1956 became the co-op president only the second woman in the country in such a position.

Today, with the recent massive power loss in many parts of the US, especially in Texas, we are reminded of the importance of electricity in all of our lives.  Almost everything we take for granted, personal and business, is based on electricity.   The unprecedented loss of power not only has led to billions of dollars of economic loss but more tragically, loss of lives in incredibly sad circumstances.

In Texas, there is now and will continue to be analysis, debate, denials and I suspect eventually lawsuits.  Yes, lawsuits, because when there is economic devastation along with the loss of life, lawsuits are often are a result.  If I had to guess, parties included in any possible lawsuit with be the Electric Reliability Council of Texas (ERCOT) which manages the flow of electric power of about  90 percent of the state's electric load and depending on Texas state laws, state leaders.

One reason for a potential future lawsuit may be a report issued In 2011 by the Federal Energy Regulatory Commission after a similar storm that year which led to massive power outages.  In the report, state leaders and regulators were warned that more "winterizing” of power infrastructure was necessary or power could be lost again with economic and human consequences.  The report seems to have been largely ignored by state leaders and regulators, primarily, I suspect, because they did not want to spend money.  Billions of dollars of economic loss later, not to mention the loss of life, looks like poor risk/reward long-term planning by state leaders.

The governor of Texas blamed wind power, which is only a small percentage of the state's power supply, for the power outage.  According to a February 18th, 2021 article in Utility Dive, the power outage was due to the failure of thermal power plants, gas, coal, and nuclear from extremely cold weather.

In today's world, electricity is good.  Not having it is bad.  Rural residents in the 1930s understood that having electricity would dramatically improve the quality of life for farmers and ranchers.  More important, forward and innovative thinkers in the Federal Government, again led by FDR, realized a federal investment in bringing electricity to rural America would not only improve the quality of life in the rural areas but throughout the country.  It was not an expense, but an investment that paid off for years to come.

The energy failure in Texas is a sad example and warning.  We need to rethink, upgrade, and modernize our entire electrical grid.  LIterally, our personal and economic well-being depends on it.  This will take leadership on the federal level along with people on the state level who are inspired by historical heroes such as Holmes Maclay and Anna Dahl.  It will be a challenge but can be done.  We as a country cannot afford, literally and figuratively, leaders who ignore warnings from the past or it is likely we will more power outages as just happened in Texas.