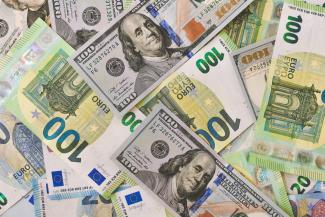 In 1932, a man walks into an establishment to purchase his favorite adult beverages.  The owner says the cost will be $9.  The man said wow, last year the same beverages cost $10.  Are they on sale?  No, said the owner, "we as a country are in a deflationary time period which is when consumer and asset prices decrease over time, and purchasing power increases. Essentially, you can buy more goods or services tomorrow with the same amount of money you have today".

Ok, the owner probably did not say that.  What the owner may have said is lots of people have lost their jobs, those that have jobs do not spend their money, and we can't sell what we have.  In 1932 deflation was 10% or more accurately -10%.

Fast forward to the beginning of 1980 and a man goes into an establishment to buy adult beverages, now legal for decades.  The owner said the cost is $11.33.  Wow said the man, the same beverages cost $10 at the beginning of 1979.  The owner then said, "We as a country are experiencing a general increase in prices and fall in the purchasing value of money".  Ok, he probably did not say this.  He may have said prices are going up quickly as we have cannot keep products in stock and it is difficult getting more.

In recent years, the inflation rate has been very low.  The average annual inflation rate from 2011 through 2021 was 1.7%.  Many have believed high inflation rates are a thing of the past.  As we have seen so far this year, that is not true. The question is higher inflation is a short event or a long-term trend?

Also, if you want to put blame one political party or the other, I would suggest you blame both equally or in my estimation, both totally.  The inflation that is taking place now has been in the works for years.  A prime reason in my estimation is rather than pay as we go as a country, our policy the twenty years has been charging it and send the bill to our grandchildren.  As I pointed out recently, the federal deficit went from $5.7 Trillion in 2000 to $27.7 Trillion at the beginning of 2021.

Inflation can have positive and negative effects both personally and socially.

Though there are options and strategies for investing during inflationary time periods, inflation can be especially difficult for low-risk investors.  For example, an individual with $10,000 at the beginning of 1970 needed the $10,000 to grow to almost $34,000 by the beginning of 1990, or about 6% annually, to have the same purchasing power as $10,000 did in 1970.

What you should do?

I have no crystal ball and inflation is a complicated economic concern with lots of moving parts and the above is a very simplistic description.  But the consequences of higher than average inflation rates for both individual planning and economic growth can be substantial.