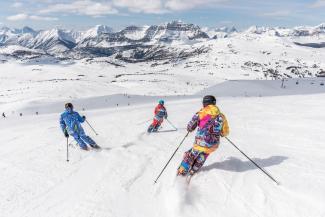 The first time I went downhill skiing, I felt everyone was staring at me.  The reason was I was the only 50+-year-old taking a lesson on the bunny hill.  It was me and a bunch of five-year-olds working our way down.  It made me feel self-conscious.  The reality was I doubt if anyone noticed me and if they did, I am sure they thought I was a mature thoughtful distinguished tree surrounded by a bunch of very young saplings.

That day, my second time going up the beginner lift, I was not prepared to get off and did not stick the landing.  This time everyone was looking at me because they had to stop the lift until I could get upright.  it is very hard to be dignified on one's hands and knees with a bunch of five years old and their parents staring at you.

A few years ago some friends had a family gathering in Big Sky, MT for a long ski weekend.  One of the husbands, who was in his early fifties at the time, had never skied before but thought he did not need a lesson because his wife had skied a few times and he thought he was a better athlete than her.  For the record, whenever a man assumes he can do something better than his wife, it never ends well.  In this case, he first planted his poles going up the magic carpet and tipped over. Getting up, he made it to the top of the magic carpet and then started skiing to the beginner lift and wiped out again.  His family members waiting at the bottom and seeing he was hurt told the lift operators to call ski patrol.  As loving family members, they did not mention they were related or even knew the gentleman.  They were just being concerned ski citizens.

The ski patrol showed up at the lift, but could not find the injured skier.   Finally, a family member, again as an anonymous concerned citizen, wandered over to the ski patrol told them to look towards the magic carpet.  Turns out, they had not considered looking in that direction as it is very rare for someone to separate their shoulder before ever making the first chairlift.

I was very self-conscious the first few times I skied because I was even not good enough to be considered not good.  For some reason, I thought about this when watching a feature on ESPN Sports Center recently which was about the National Brotherhood of Skiers or NBS.  https://www.nbs.org

The NBS was organized in the 1970s to promote and facilitate skiing by and for Black Americans.  The founders were two black gentlemen who had taken up skiing a few years earlier.  Well watching the feature, I thought back on how self-conscious I felt skiing the first time.  I cannot imagine how self-confident and resilient these individuals had to be to participate and enjoy an amazing sport knowing at whichever ski resort they were at, they would likely be the only person there who would look like them.  They had to get used to people staring at them and I suspect some would likely resent their intrusion in what was at the time an almost exclusively a white-only sport.

In 1973, the ski club organized a ski trip to a major ski resort.  According to the feature, when booking accommodations and ski passes, the club did not tell the resort its members were Black.  However, a few days before arriving they did notify the ski resort it was a Black Club.  Again, according to the feature, the ski resort notified the governor of the state it had 300 Black skiers coming to ski and the governor decided to put the National Guard on alert in case some locals decided to harass or possibly cause the Black skiers harm.

Can you imagine then or now a state governor putting the National Guard on alert if the group of white skiers were coming to ski at a local ski resort?

The NBS has grown since then and it was interesting reading about it on their website.  The feature reminded me of something we discuss in my Long-Term Trends Presentations.  Our country has always been a diverse country and it continues to be even more diverse going forward.  Some who look like me are worried about this.  I, on the other hand, believe our diversity is one of our great strengths and the key to mine and everyone's future financial security is to not only celebrate our diversity as a country but embrace it. Many ski resorts learned this a long time ago.