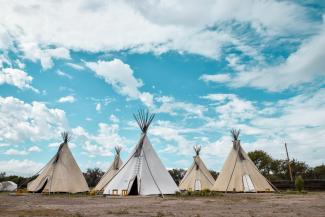 It was my second year of downhill skiing and I was becoming a solid blue or intermediate skier.  It was February and a perfect bluebird day for skiing in Big Sky, MT.  A lot of snow and not many people on the mountain.  I probably set a personal record for runs in one day.  No lift lines, up, down, rinse and repeat.  Except after one run in the early afternoon, there was a crowd at the lift line.  Unfortunately, a skier had taken a bad tumble suffering a serious injury.  A crowd had built up at the ski lift as we waited for ski patrol to get injured skier on the lift.

When I got on the lift, I joined three ladies.  Trying to be social, not a strength for me, I asked where they were from. They said New York and New Jersey.  Being polite they asked me where I was from.  I said had a condo in Big Sky, but my residence was a Fargo, ND.

Then one of the ladies said, "Do you know so and so, the last name was Peterson.  They live near Fargo, in Grand Rapids".  I said Grand Rapids is in Michigan.  I then said Grand Forks, ND is near Fargo.  The lady said, "Oh, that's it." Then she said, "well, do you know them".  I said no, explaining Fargo metro area had a population of well over 100,000 and Grand Forks was almost 100,000 population.  I should have asked if she meant the Petersons or the Petersens as that would have narrowed it down for me.

I think about that conversation a lot.  One, because it was offensive to think other thought we in Fargo lived in wigwams and teepees.  At that time, most of us lived in sod huts.

Two, because it illustrated the stereotypes and assumptions we have about each other.

My daughter-in-law speaks nine languages and has traveled all over the world including working in Africa for a couple of years. Her husband, my son, is fluent in Spanish, taught English in South America and has traveled extensively in both South and Central America.  The only time, I have ever seen either of them make assumptions about someone else, is when that person talks about a place they have never been using stereotypes about that country and their people.  [For the record, spending a week in an all-inclusive in a foreign country does not count as traveling in that country.]

Today's world is complex.  Making assumptions about people, geographic areas and countries that are different than us, never makes the world safer a place.  If fact it does the opposite.

We all know what assume stands for, but just in case, ASSUME stands for Asking Someone Something U just Met from a different background to help Educate yourself.