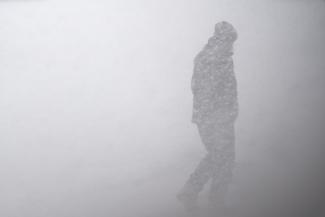 Years ago, I was skiing with family at Moonlight Basin before the merger, and it was quiet day, especially for the Holiday Season.  We pretty much had the place to itself.  One reason was it was early season skiing.  The Resort was making snow by the Six-Shooter Lift.  The snow making machine was throwing the snow in a high ark across the bottom of the run.  My family and other intelligent skier returning to the lift made a large loop to go around the ark.  I, on the other hand, thought I could go underneath the ark.  Turns out I could not.

I got hit by a full blast and was suddenly covered from head to to toe in essentially ice.  As these things go, I wiped out and ended up with another coating of ice.  I found out later a guy in the ski lift line standing next to my family said something to the effect, “look at that idiot”.  My family, always supportive, pretended to not know me.  I guess family support along with paying for lift tickets only go so far.

There are many terms for different types of snow.  In North Dakota there is snirt which is snow mixed with dirt.  Snirt is the ugly duckling of the snow world.

I have been thinking a lot about snow.  In mountain resorts, snow drives the entire economy in the winter.  Skiing, snowboarding, cross country skiing, snowshoeing, snowmobiling all are supports which depend on snow. We all pray for lots of snow during the winter season, the earlier the better.

At the same time, I have been thru enough blizzards in Minnesota and North Dakota to know that snow, when it is driven by high winds and below zero temps can have serious human and economic consequences.

This winter, we have seen snow events literally bring parts of the country that are not used to snow storms to a complete stop.

In 1997 Eastern North Dakota and Western Minnesota had record winter snowfalls.  This along with untimely rain and quickly warming temperatures led to a 500 year flood.  Twelve years later the same thing happened.  For those poor in math, 12 is less than 500.  A lot less.  Both states have implemented plans to reduce the impact of future flooding from extreme snowfalls.

In February of last year, Texas was hit by a devastating winter storm.  The economic loss has been estimated to range between $80 and $130 billion dollars.  Some have called it a freak storm.  I would suggest the only freaks in that storm were the local politicians who failed to plan for it.  As near as I can tell, many of the local Texas politicians are planning for the next weather event by building a wall long the Border of Mexico.  Somebody should tell them their winter storms are more likely to come from Canada, not Mexico.

There are some who wish to continue to believe weather happens and nothing has changed over the years when it comes to snow and winter storms.  I get it, ignorance can be bliss.  At least for awhile.  But there are many more who understand we are in the midst of a long term shift in weather patterns.

According to research done by NOAA, there were twice as many extreme snowstorms the last half of the past century as took place in the first half.  Now we are in a new century and the pace seems to picking up.

Part of financial planning is considering short-term and long-term risk management.  It is easy to say  there is nothing we can do about the weather.  And that is true.  But there is lots we can do to plan for extreme weather events, in this case extreme snowstorms and their resulting economic costs.  This is risk management.  It starts with educating ourselves and continues with expecting elected leaders to have a long-term plan to address the economic costs of extreme weather events.

For me, it is much more scary to not think and not plan for more extreme winter events then it is to do so.