Snow today and tomorrow and, Oh Oh, that cannot be good, 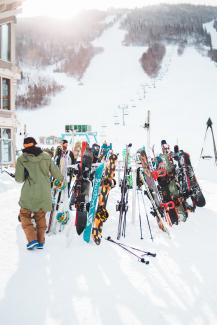 Snow today and tomorrow and, Oh Oh, that cannot be good,

This is a little embarrassing, so please do not tell anyone this story.

First a little background.  I started downhill skiing at age 53 which many would consider being late in life.  There is nothing more humbling than being the magic carpet with a bunch of 5-year-olds.  Though in all fairness, 5-year-olds have no fear and bounce.  A 53-year-old, on the other hand, can have a lot of fear their first time on skis and I stopped bouncing when my high school football career was over.  In my first year skiing, I was very nervous. Pretty much every time I got on a chairlift, I called all my family and friends and told them it had been good knowing them.

Anyway, fast forward to the next year and I was moving into the intermediate level.  One of my friends at the sporting goods shop I used had suggested I check out Moonlight Basin, especially Horseshoe which they described as very scenic as it wrapped around the outside the Mountain.

It was a bluebird Tuesday morning and it had snowed most of the previous night with 1-2 feet of new snow. Wanting to be the first on slopes, I got to the Pony Express lift well before opening and was first in line to get on the chairlift. The lift operator asked me if I was excited to ski. I said yes.  "Well", he then said, "we require you to put on your skies before you get on the lift".  They were still on my shoulder.  That's embarrassing.  In all fairness to me, 5-year-olds have adult supervision, while I was flying solo with no adult supervision.  In this context, it was a much more understandable mistake.

A total of three lifts later, I am getting ready to go down the catwalk on the way to Horseshoe.  There was a ton of snow, I was the only person there except for the tracks of another skier which I followed.  I was about halfway down the catwalk when I realized due to a ridge in the trail I was going to be air born.  Since we had not covered this in any of my lessons, I was pretty sure that it was not going to end well.  Now keep in mind, by experienced skiers standards or your average 5-year-old, this was no big deal, but being neither of those, I was a bit nervous. I hit the ridge, was air-born for what seemed like quite a while but in reality, was barely a moment.  I remember looking down and deciding this was going to be a lot more fun if I did not fall so I stuck the landing and went on to have a glorious day skiing.  Note, this was the only time in my life I ever got to say, "stuck the landing".

Everyone who lives in a ski resort understands the economic impact of snow is substantial.  I recently reviewed a paper, "Economic Contributions of Winter Sports in a Changing Climate" 2/23/2018 published by the Institute for the study of Earth, Oceans, and Space at the University of New Hampshire Scholar's Repository.  The Report states during the 2015–2016 winter season more than 20 million people participated in downhill skiing, snowboarding, and snowmobiling in the US with an estimated $20 Billion of economic benefit to the US economy.

This report discussed the economic contribution of winter snow sports tourism to the U.S. economy along with the current and future consequences of climate change to the industry.  There are many many scientists, researchers, academicians industry professionals who know more about this subject than I do.  But one thing I have realized from the pandemic, ignorance can be common and it is not bliss.

As I have documented many times, there were numerous scientists, researchers, academicians, and public health-care professionals who provided us as a country multiple warnings about the inevitability of a pandemic and the potential economic consequences.  Some like me had read about the potential of a pandemic but assumed our Nationally elected leaders, regardless of political background, would be cognizant of the risk and work to help us as a country prepare for it.  I was wrong. Some Nationally elected were aware of the risk, but many were not, be it from lack of intellectual ability and/or worrying about their next Pac or SuperPac fix.

We all need to work towards educating ourselves on a variety of issues including the effect climate change may on the economics of the winter tourism season.  After all, there may be a 5-year-old today who does not pick up downhill skiing until age 53 and we need to do everything we can to make sure this future ski dude can hit the slopes with his family on a big snow day.