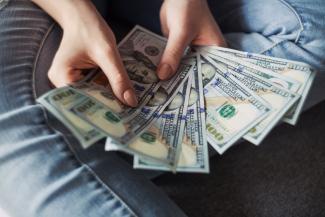 There has been a lot of publicity about very wealthy parents who are bribing college personal at some elite Universities to get their sons or daughters accepted into the institution.  I do feel bad for the children of these parents.  Their whole life they have lived in privilege being told by their parents they are bright talented individuals.  Then one morning they wake up and find out their parents think they are, to put in delicately, the least talented French Fry in the happy meal.  In fact, their parents thought so poorly of them, they spend tens of thousands to hundreds of thousands of dollars to get them into college.   They actually spend more money trying to get their child into college than at the college.

Part of the parent’s rationale is they wanted their child to attend an elite University.  With this disclaimer, I did not attend an elite college nor would I have been able to get into one coming out of high school, I have never thought attending an elite college or University had anything to do with long term financial success, making a contribution or enjoying life.  I have met some very bright people with elite educations.  I have met others who I considered to be opposite of bright.  In 2018, a member of the US House of Representatives on the Science, Space, and Technology Committee suggested at a Committee meeting that rising sea levels was due to rocks falling into the ocean.  He attended what would be considered an elite University.  Maybe his parents paid to get him admitted also.

As humorous as this is, it is also very sad and reflects a huge disconnect in the US between the very wealthy or top 1% and the rest of our population.  The reality is the majority of students seeking sometimes of post-graduate education struggle to pay for it.  As reviewed in the previous blog on student loans, student loan debt is approaching $1.6 Trillion dollars and borrowers are struggling to pay it back.  That blog, addressed current borrowers, the potential long term negative impact for our economy caused by student debt and the difficulty many borrowers will have to obtain personal financial security.

This blog addresses what I would suggest to parents and their children who are preparing for some type of post-secondary education in the future.  However, before going there, let me regress for a moment.  When I graduated from a private liberal arts college in MN, admittedly a long time ago, I had $4,400 of student loans.  I borrowed the entire amount for tuition and board my Freshmen year, $2,200, $1,500 for my sophomore year and $700 during my junior year.

The balance I paid from working multiple jobs in the summer and 30+ hours a week during my junior and senior academic year.  Also, my mother kicked in some for costs second semester of my senior year.  I suspect it was because she was now pretty sure I would graduate from college and she could tell others she paid for it.  Unlike the parents who paid bribes to get their kids into colleges, my mom always told me I was intelligent, however, she also told me I was lazy.  Not sure about intelligent, lazy for sure was true.

What I did then could not be done today so comparing time periods is at best ignorant.  Today, if a student borrowed the entire amount for the college I attended for the first year, it would be over $50,000.  That would be insane.  Second, proportionately, the minimum wage was much higher than today.  When I was in college, the minimum wage was $1.60 per hour.  One of my jobs was working for a National retail shoe company which paid hourly plus commission.  For most pay periods, I made considerably more than minimum wage.  My junior year, in all jobs I made enough money to cover tuition, room, and board living off campus, had a car, and cash for liquid refreshments.  That would be impossible today.

When I was in college, working 1,000 hours in a year at minimum wage would generate $1,600 of income which would have paid for over 70% of total costs of the private college I attended and 100% of the State University in the same city.  Today, working 1,000 hours at minimum wage would pay for about 15% of the total costs of the private college and about 40% of the same State University.  People my age who think it is the same as it was when we were in college need to spend more time thinking and learning and less time talking.

What can current students do who are planning for post-secondary education and their parents and they are looking at loans as an option?  First of all, student loans are not bad, in fact, they may be the best investment an individual ever makes.  But students and their parents have to be more thoughtful than was necessary in the past.  Individuals and households of all ages often struggle to make monthly payments on a loan.  It is almost impossible for an 18-year-old or really anyone in their early 20's to understand the difficulty of paying back a loan.  Given this, I would suggest the following:

I realize there is some “do as I say, not as I did” in this blog.  But things are different today, very different.  Without a doubt in my estimation, some type of post-secondary degree is necessary for financial success in the US.  And retraining is going to be necessary as A-I impacts our economy.  However, until the country changes its National policy regarding education to be a long-term investment for the betterment of the country, individuals and households who require to student loans to help finance their education will need to be informed, thoughtful, and detailed in their analysis.