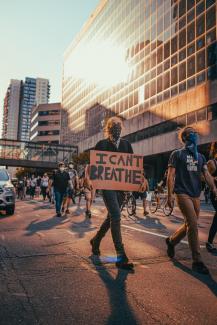 Like many of us, with horror and disbelief, I have watched the video of the murder of a black man in Minneapolis by policeman several times.  Any person with a conscience and spirit of faith cannot believe this happened.  But it did.

I have two close friends with children and for each of them, the father is black.  I know each of these mothers worry every day that their child could be in the wrong place and the wrong time and be killed by a white person.  I am or was friends with the fathers as one passed away years ago from cancer.

We all worry about our children, that never stops, no matter the age.  But, I cannot imagine waking up in the morning and having to worry that your son will be shot jogging, [Georgia], in his own apartment [Dallas], threatened while bird watching [New York City] and murdered in Minneapolis.  Except for one, all of the above were done by white on-duty police officer, white off-duty police officer, white retired police officer.  These are not exceptions, as they are regular occurrences.  Do not believe me, Google "black men killed by police" and start reading.

As I think about this about personal, family, and social tragedy, I think back to an incident that took place years ago when I owned my firm with a client of mine at the time.  This particular incident took place after Barak Obama had been elected President.  The former client began discussing politics and called President the "n" word.  I was appalled and he was embarrassed.  Not because he said it, but because I was offended by his language and which I made clear to him.

Incidents like this happened a few times with different clients.  In each case, the clients were good people, successful, and cared for their families.  They were also often boosters of the local University football team.  I wonder how the black athletes on this football team would have felt knowing these individuals cheered for them on Saturday and then called the African-American President derogatory racist names the next week.

They attended and financially supported their church of choice.  I wrote a blog the past February on racism which I said, among other things, "you can be a Christian or a racist, you cannot be both".

They pride themselves on being an American, but do they believe in the Declaration of Independence which says, "all men are created equal, that they are endowed by their Creator with certain unalienable Rights, that among these are Life, Liberty and the Pursuit of Happiness"?  The founders' initial definition was limited to exclude women and people of color.  We as a country have evolved to include all in this definition as it should be.

They are representative of a part of white America who I describe as subtle racists.  These subtle racists were outraged when Colin Kaepernick took a knee during the National anthem during an NFL game, a protest which he discussed with a white retired Army Green Beret.  Maybe if they had listened and learned George Floyd would still be alive.  When the "Black Lives Matter" movement first started, instead of being critical, where would we be today if they had engaged in a thoughtful discussion?  Would Ahmaud Arbery still be alive?

The white subtle racists will be vocal about the damage vandalism is being done by protesters.  They will not mention the vast majority of the damage in Minneapolis and St. Paul is being done by outside agitators and criminals who came to the Twin Cities to take advantage of tragedy.  They will also not mention it started with a white policeman literally killing a black man in public.  Nor will they admit it is the culture of subtle racism of which they are part of that contributed to George Floyd's murder and the human and economic costs that go with this.

Yes, I said economic costs.  They are, in part, financially responsible for the devastation of parts of many cities which will affect the residents of those cities for a long time.

The vast majority of protesters are peaceful outraged and scared.  Scared because if the are black, they know what happened to George Floyd and many other people of color, could happen to them.  Outraged because this should not and can no longer happen in America.

One last thing.  George Floyd was an employee, a boyfriend, a son, a sibling, and a father.  I hope these ex-clients and the millions like them, wake every morning for at least the rest of the year thinking about him, his friends and family's loss, his communities' loss, all of our loss.  As they think about this, I hope they and all the subtle racists like them realize they are part of the problem and have to switch sides and become part of the solution.