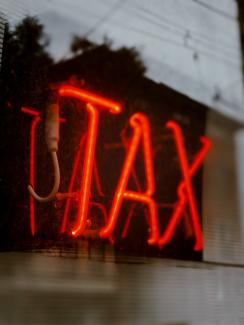 I started working on my tax return for 2021.  I have been sending in tax returns and paying taxes for a long time.  As I was getting the information together, I found my old returns which I have kept over the years.  Among other things, when I feel like a failure, they help remind my little business grew over the years as I made more money and of course paid more in taxes.  I never complained about paying taxes because they are the result of making money.

Back in the day when I first self-employed I made very little money and paid very little in taxes.  Paying a lot of taxes is better, much much better.

Years ago I worked was a client who was a successful small business owner who once said something like "no one likes paying taxes, but paying taxes are how we support this country we all love and the freedoms it provides".  "What happened?" he then asked.

What happened is we were fed a myth [or outright lie] that cutting taxes will lead to good economic times.  And maybe that might have been true if we cut taxes and reduced spending.  But we did not do that.

My generation, baby boomers took an entirely different approach which has been generally to charge it and send the bill the grandkids.

From 1961 the marginal tax rate dropped from 91% to 71.75% in 1970.  And as many of us remember, the 1960s were not an easy time period.  For example, Bay of Pigs, racial violence/protest, the assignations of JFK, RF, MLK and of course the beginning and escalation of the Vietnam War to name a few.  The deficit went from $289 Billion in 1961 to $371 Billion in 1970 or a total increase of about 28%.  Remember the good old days we measured the deficit in billions, not trillions.

I used simple math and cumulative numbers, but to me, the picture is very clear.  The politicians and their followers who have implemented policies of cutting taxes and increasing expenditures over the years have pushed are country towards bankruptcy.  A detailed analysis is not going to change the big picture.

A few years ago an elite black athlete took a knee during the National Anthem.  Before doing so, he had consulted with a white former professional athlete and Navy Seal.  This has been followed by many other athletes of all backgrounds doing the same throughout the country.  It has also been widely criticized by many for being disrespectful and/or ungrateful.  I have often wondered why there has not been similar outrage over politicians and followers who have greatly increased our federal deficit by consistently cutting taxes and increasing expenditures.  What's more un-American, kneeling during the Anthem or pushing our country towards bankruptcy?

I do not see any will power in the US for decreasing expenditures, but our country has had historical will power to raise revenues to its meet obligations.  it is time for us to do this again.