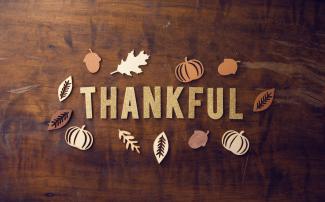 As we get ready for the Thanksgiving Holiday, it is important to be simply thankful.

Thanksgiving became a national holiday on October 3rd, 1863 proclaimed by Abraham Lincoln.  He was inspired by Sarah Joseph Hale, the woman who wrote “Mary Had A Little Lamb,” I wonder if she had written, "Mary Had A Little Turkey" if we would be eating lamb for Thanksgiving.

The first Thanksgiving was celebrated in 1621.  Historians believe there were 50 Pilgrims, 90 Wampanoag Indians, which included a total of five women.  I am guessing that these five women did all the work, cooking and then cleaning up afterward.  Almost 400 years have gone by, and some things have not changed.

The average number of calories consumed on Thanksgiving is about 4,500.  On a separate, but unrelated note, it is estimated about 70% of Americans are overweight.  Given this, I am going to change my eating behavior on Thanksgiving by eliminating carrots and cutting down on whip cream on my pumpkin pie.

Like most of us, on Thanksgiving, I will be thankful for the normal things.  My wife, our children and now grandchildren.  My siblings, in-laws and their families.  Ok, for those of you whose in-laws drive you to drink, first of all, drink responsibly, no one likes a drunk on Thanksgiving or any other day of the year for that matter. Second of all, you married the person who brought you those in-laws so deal with it, it’s really your responsibility.

In addition to the normal things for which to be thankful, broaden your thankfulness.

The original Thanksgiving was in part, a celebration of growing and harvesting sufficient food the previous months to get through the winter.  Most of us have little to do with the food we eat, but we can be thankful for those that do.

The Thanksgiving dinner is often the sum total of many different types of foods, some from the US and some imported from various countries around the world.  I looking at a package of frozen peas that were grown and packaged in California.  My frozen whip cream was made in Ohio.  [Yes, I know any food product which has a shelf life measured in years not weeks or months is not healthy, but I like it.]  I was also looking at a package of frozen blueberries, which were grown in Chili, packaged in Canada and distributed out of California.

Every bite of food you eat at Thanksgiving has a story.  Take a moment to be thankful for all those from beginning to end who made it possible for you to enjoy the meal.  A lot of people from various places worked hard, often at low pay, to bring to food to your Thanksgiving table.  They include farmers, workers at food processing and packaging plants, truck drivers and all those in the food transportation industry, and end with all the workers at grocery stores.

When you're waiting in line with a cart full of groceries at your grocery store, please resist the urge to grumble.  First of all, you could have bought all you need last week.  Second, check-out workers see a long line their entire shift this week and yet are expected to greet each customer with a smile and almost all do.  Smile back and be thankful.

If fact, be thankful for all of the above different workers.  They work very hard to make Thanksgiving along with other Holidays enjoyable for you.

If you eat out for Thanksgiving dinner, in addition to the above, be thankful for the cooks, servers and all the staff who make the meal possible.  Also, make sure you leave a big tip.  A small tip after a big meal is almost a guarantee of indigestion.

Enjoy Thanksgiving with family and friends and be thankful for them.  And spend some time being thankful for all those who make the meal possible.

Yes, there is tragedy, ugliness, violence, and corruption in the world.  Between cable TV and social media, we are continually bombarded by negative stories.  The world can be an ugly place.  It was in the 1620s when the first Thanksgiving took place.  It was in the 1860s when President Lincoln made Thanksgiving a national holiday.  But then and now, there is more beauty in the world than ugliness.  Take a moment to be thankful for all beauty and good in the world.

For some of us, we should probably decrease our total bites by about 50%, but regardless of your total bites of food, enjoy and be thankful for each one.