Think about the history behind Women's International Date, Please!!! 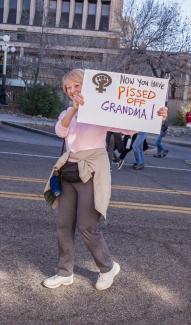 Think about the history behind Women's International Date, Please!!!

Back in the day, my administrative staff, two very talented ladies, and our spouses were attending the wedding of a student assistant who worked in our office.  During the homily, the pastor turned to the groom and said, "As the captain of your ship" at which point I stopped listening and turned to my staff and said, "I want to go here, I want to be the captain of my ship".  My staff started to laugh and said I was not qualified to be captain of my ship.  After discussion, they decided I may be qualified to be the second mate on the ship's dingy.

A few years later, my wife and I attended the wedding of one of our son's basketball coaches. During this homily, the pastor said "women were subservient to men.  I was watching our son and his friends.  All had talented professional mothers and several had successful sisters.  They may have heard the phrase before, but none thought an adult would ever say it seriously.  For the record, as a person of faith, I believe we should all strive to be servants to each other and no one is subservient.

In his scholarly work, "Jesus Misquoted", Dr. Bart Ehrman, Distinguished Professor at the U of North Carolina has a section in chapter 7 entitled, "Women and the Texts of Scripture".  In this section, Dr. Ehrman discusses how women were regulated to a lesser role either thru translation errors from original texts, accidental or intentional, and/or enforcement of cultural norms.  By the way, if you read the book, and decide Dr. Ehrman's research is incorrect, contact him, convince him of his errors, then maybe we can talk.

When my mother was born in 1917, women could not vote.  We often take this for granted today, but from the birth of our country, white men, generally elderly white men, felt women were not qualified to vote.  In fact, a precursor to Women's International Date, which is March 8th, took place in 1908 when 15,000 women in New York City marched for shorter hours, better pay, and voting rights.

It took a long time to get better pay.  When my mother got her first teaching job in the early 1960s, she had to apply to the school board for head of household pay.  Keep in mind, all members of the school board, older white men, knew she was a widow with dependent children and by then word had started to get out her youngest son was a terror.  She finally got the additional pay, $50 a month which was big money back then.  Not one of these gentlemen could have done what my mother had done, going from a widow on a poor farm with six kids to a teacher in less than five years.

One of my favorite historical fiction writers, James Alexander Thom, has a book entitled "Warrior Woman" which is based on the life of Nonhelema, Peace Chief of the Shawnee Nation.   The book begins in 1774 when 3,000 Virginians were marching on Shawnee villages.  Though she opposed the war, the approaching army gave her and other Shawnee leaders no choice.  Subsequently, she led and fought in a legendary battle which ended in a draw.   Nonhelema not only spoke English but was fully literate.  One of the interesting themes of the book is when she came to meetings as chief representing her people, Colonial leaders, again white men, would not consider her to be a leader of her people and often chastised or ridiculed her for even being at a meeting that was supposed to be for men only.  The prejudice against women has been around for a long long time.

For thousands of years, women as a group have been running uphill and men, as a group, have been running downhill. This does not mean that men do not have challenges and difficulties.  I certainly have had mine.  But I realized a long time ago that as a man, I did not have to deal with sexism or prejudice the same as a woman.  My journey was still very hard at times, but it simply did not have the same obstacles as a woman on the same journey.

There are many men like me who believe women and men are equal and should be treated equally.  But it is also true there are also many men who are threatened by women, especially successful women.  It is no accident that men criticized the academic achievements of our current First Lady and our current Vice-President.  I suppose these two bright talented women could debate the men, but I suspect for the women, it would the same challenge as debating a pet rock.

I would suggest all of us, but especially men take some time to think about the history and reasons for Women's International Day.  Check out the Women's International Day website [www.internationalwomensday.com]. The website, using the World Economic Forum as an information source, states that gender parity likely will not be achieved for almost a hundred more years.  As a grandfather of bright talented granddaughters, this is not acceptable. We have to do better faster.