Time to rethink everything including your personal financial plan. 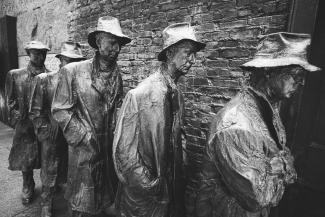 Time to rethink everything including your personal financial plan.

According to family legend, my grandparents did not lose money in the stock market crash, they did not lose their farm land, however, they did lose all the money they had in the local bank.  That was not uncommon during the Great Depression.  During the first ten months of the 1930, there were 744 bank failures.  For the entire decade, about 9,000 banks failed.  It was a primary reason for the formation of FDIC.  Today, bank depositors take FDIC Insurance for granted, but it was important legislation that came out of the 1930s.

In fact, as part of the New Deal in the first few years of Franklin Roosevelt's Presidency, there was a variety legislation enacted to to help recover from the Depression.  Following are a few:

The Great Depression was devastating for thousands of families.  Many, like my grandparents, lost their money they had in banks.  Others lost farms and businesses.  The Great Depression also inspired a new way of looking at things and the development of federal programs to both protect and provide opportunity Americans.

Today we are in a new normal and I would suggest we need to rethink everything on a National and social basis.  Everything you believe should be up for thoughtful and intelligent discussion using independent academic sources of information as a basis for the conversation.

This link has some financial planning questions you should be asking yourself.

I may be wrong, but I suspect there is  a whole lot change coming between tomorrow and the 10-20 years. Talking with an independent qualified financial planning professional may cost you a few dollars today, but may also increase your financial security for years to come.