Ukraine, history, the human cost of war, and democracy. 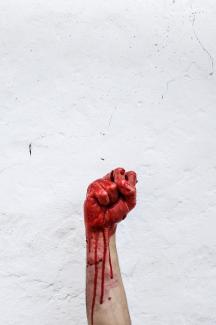 Ukraine, history, the human cost of war, and democracy.

After that, I got close a couple of times, but always managed to deflect with humor or other similar strategies to deescalate a situation.  I learned at a very early age fighting is sometimes the only option, but never is the best or first option.

WWII is an example of fighting with no option.  Evil had entered the world in the form of Nazi Germany and it allies and the only option was war.  Our "greatest generation" won that war, but the cost was very high.  It is estimated military deaths approached 25 million, civilian deaths related to the war and it atrocities were around 30 million and civilian deaths from war related famine and disease may have been as high as 28 million.  When we look back at statistics, in this case it is likely over 80 million people died during WWII, we look at them as statistics and ignore they were children, sons daughters, mothers fathers, siblings, grandchildren, grandparents, uncles and aunts and more.  Many if not most had good lives before the War started

Today we all watch with shock and horror as Russia invaded Ukraine.  From a financial planning perspective, I have felt the past few weeks there was a high probability Russia would invade Ukraine.  In Russia's mind, at least their leader, President Putin's mind, they had both political and economic reasons to do so.  In reality, they had none.  The invasion is an act of aggression and evil.  The pain and hardship being inflected on the people of Ukraine is sad, unbelievably sad.

Adding to my sadness is it may be that some in the US helped make this invasion possible.  The former US President called Putin a genius.  Putin is many things, genius is not one of them.  In today's world, he is a dictator, in medieval times Putin would be a strong evil king and the former US President would be considered to be his vassal.  A vassal is someone under the protection of a of a feudal lord or in this case Putin to whom the vassal has vowed homage and fealty.  The 2020 bi-partisan US Senate Intelligence Report confirmed that Russia led by Putin using social media among other things helped the election of the former President.  Of course, that's what kings do for vassals to help the vassals get power and then the vassals support the king and call the king a genius when the king does evil.

In October, 1962 the Cuban Missile Crisis took place and President Kennedy faced down Soviet leader Nikita Khrushchev’s.  In June, 1987 President Reagan told the leader of the Soviet Union, "tear down the wall" which was the Berlin wall.  This happened and eventually led to the reunification of Germany in 1990 and the dissolution of the Soviet Union in 1991.  We now have a former President and his followers complimenting Putin on the atrocity of Ukraine.

Volodymyr Zelenskyy is the democratically elected leader of the Ukraine.  Putin fears democracy as does the former US President.  Putin ended democracy in Russia including arresting any dissidents to his regime and the latter by falsely claiming he won the recent Presidential election with absolutely no proof.  In fact, every review has confirmed the election results were fair and accurate.  I guess this is one thing Putin and the former President have in common, a fear of democracy.

President Zelenskyy is a hero.  He may be killed by the Russian military or perhaps already has, but not yet confirmed by the media.  But against Russia's military power and aggression, and fear for the life of his family, lives of his people and his own, he has stood firm.  The former President was tried for impeachment and convicted in the House for his actions in trying to influence Ukraine.  I wonder, would this war have taken place if the former president had been a better supporter of Ukraine and not of Russia.

This will war will effect economies worldwide for sometime.  I have often heard war can be good for economies and the stock market and there is certainly evidence to that affect.  But that is only true for the countries who supply the weapons and materials for the clean-up afterwards.  It certainly is not true for the Ukrainian economy.  I watched with great sadness as there was coverage of Ukrainian familles at the border of Poland where the husbands were returning to the frontlines to fight for their country while wives took their children to safety.  I suspect there are many single men and women who are still in the country fighting for their country's freedom.

I am not sure what I can do to help the people of Ukraine, but one thing I can do is vow to never support a politician who in anyway has affirmed Putin and this invasion.  I will also question any follower of above mentioned politicians commitment to democracy and freedom, here or abroad.

Sooner or later Ukraine will win and Russia lose because always trumps evil, it just a matter of time.