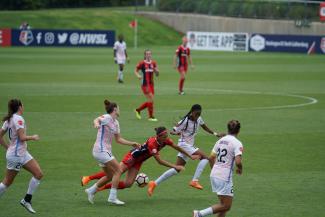 The record-setting US Women have just won their fourth US Women's World Cup and their second consecutive win. They set other records in the process.

Non-soccer fans may not appreciate this amazing achievement.  Soccer is the world's sport, and the US Women's team has dominated the world's stage.  They represent the best in the US.  To reach this goal, they worked hard separately and together, they sacrificed, they believed in themselves and each other.  They had leaders which they respected and brought the best out of them as individuals and as a team.  It was a joy to watch them, partly because of the joy with which they played.

They represented the US in all the best ways.  If one takes the time to research the journey this team took to repeat as World Cup Champions, there were challenges, hardships, and setbacks to overcome on the way.  But they did, and this is an American value.

They were a role model, not just for young girls, but all of us.  They respected their opponents but we're confident in themselves and the work they had put in.  Off the field, they were thoughtful, articulate, and passionate about the rights of women and minorities

As many know, the Women's team has filed a gender discrimination suit against the US Soccer Federation.  This will play out in both the court of public opinion and federal courts.  There are some who suggest that because the revenue for men's world cup is greater, they should be paid more.  But I would suggest that it is a simplistic argument.  First of all the revenue for women's soccer is increasing.

I would suggest it is also important to consider the trend line.  The first Women's World Cup was held in 1991 which was won by the US.  Title IX was passed in 1972 providing equal opportunity for women's sports.  This means that in the US, women were given the same opportunity as men in 1972.  Less than 20 years later US Women's win the first Women's World Cup.  And less than 20 years later, the US Women win their fourth title and the total tournament drew a global audience of about 1 billion.

Comparing Men's US World Cup performance to US Women's World Cup performance, wait, there is no comparison. The US Women's team has four championships and made five consecutive finals.  By comparison, since the Men's 1990 World Cup, the US Men's team has won a total of five games, scored a total of five goals and their best finish was reaching the Quarterfinals in 2014.  In 2018, the Men's team did not qualify for the World Cup. For NFL fans, it would be the same as comparing the Cleveland Browns to the New England Patriots.  The Cleveland Brown receive participation ribbons while the New England Patriots win Super Bowls.  Like the Cleveland Browns which could become a very good team this season, the current US Men's Soccer team has potential.  I suspect if they improve their performance, it will be in part inspired by the achievements of the Women's Team.

The US Soccer Federation has the challenge of addressing the lawsuit.  Part of this process will be to increase funding for women's soccer going forward.  There have been several articles regarding the investment other countries are making in women's soccer.  For the US to continue to be dominant or even competitive, the US Soccer Federation will need to do the same.

In the meantime, it is important to enjoy this wonderful achievement of the US Women's Soccer team. They have represented the US with both class and excellence.  Just as the 1999 team inspired the next generation of US women playing soccer, this team will do the same.  They another reminder of why the US is great, has always been great, and will continue to be great.