As we are confronted by the evil of racism, there is good news. 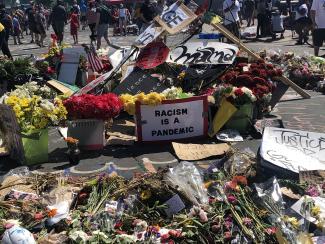 As we are confronted by the evil of racism, there is good news.

Though I never listen to what is called cable TV political shows or political talk radio, I do remember this incident very well.  For background, I am a sports fan and watch ESPN most every morning while I stretch and do other exercises.  I am also a huge NBA fan.

The incident took place in February 2018.  LeBron James and Kevin Durant had made critical comments of the current President in a video interview.  Shortly after that, a well-paid media personality on a major network told Lebron James he should "shut up and dribble".  Coverage was on ESPN and internet news summaries which I follow.  My immediate thought was though I do not know if the media personality is a racist, this was clearly a racist comment.

The media personality also said, "Look, there might be a cautionary lesson in LeBron for kids.  This is what happens when you attempt to leave high school a year early to join the NBA. And it’s always unwise to seek political advice from someone who gets paid a hundred-million dollars a year to bounce a ball."

I would suggest it is even more unwise to take political advice from anyone in the media who are paid hundreds of thousands of dollars and in some cases, millions to make political comments.

Keep in mind that not only is Lebron James the best basketball player on the planet, but he is also a successful businessman, and working with the City of Akron, has spent millions on developing a public school for at-risk youth.  FYI, the school has exceeded expectations to date, and all graduates who attain certain standards are guaranteed a scholarship at the University of Akron.  This is one of many charitable contributions made by James.  I am sure the media person does nice things also.

Now let's fast forward.  During the riots and protests after the murder of George Floyd, NFL star quarterback Drew Brees said it was disrespectful to kneel as a protest during the National Anthem.  He received considerable backlash after which he spent time talking with teammates and other black friends and then apologized.  In his apology, Brees said "Through my ongoing conversations with friends, teammates, and leaders in the black community, I realize this is not an issue about the American flag. It has never been. We can no longer use the flag to turn people away or distract them from the real issues that face our black communities...We must stop talking about the flag and shift our attention to the real issues of systemic racial injustice, economic oppression, police brutality, and judicial & prison reform."

Until Bree's apology, a supporter of his was the same media personality who before his apology said about Brees, "Well, he's allowed to have his view about what kneeling and the flag means to him. I mean, he's a person...  He has some worth, I would imagine. I mean, this is beyond football, though. This is totalitarian conduct. This is Stalinist."

And this is the definition of racism.  Two separate standards for successful well-known professional athletes. One, black, told to shut up and dribble, the other white, affirmed in his right to speak. Any follower of this media personality who agreed with comments about Lebron James and also agreed with comments about Drew Brees needs to take a time out and think about being a "Subtle Racist" on which I wrote recently.  Pretty sure you are one.

But there is really good and positive news here.  Drew Brees listened and learned.  I believe his apology was sincere, came from the heart, and brought to him a new awareness.  Even more powerful was his wife, Brittany Brees, emotional and powerful post on Instagram starting with "We are the problem".

Some will take a cynical perspective on the Brees.  I am just a little bald guy in the middle of nowhere and will never know them or any other successful famous person.  But I do believe their growth is due to listening and learning on their part.  It is also is consistent with what is happening and will continue to happen throughout America as millions of white Americans think, learn, and realize the human, emotional, and financial costs of racism.  Though it will take time and there will be opposition like our subtle racist media personality and followers, we are and will continue to change for the better.

And again, this is really good news.  Good because we are a step closer to becoming a country of equal opportunity for all and no discrimination.  Good because racists and subtle racists are expensive and have cost us as a country a lot of money.  The damage from the protests is in part, the financial responsibility of the subtle racists who have fought equality.  The changes in police departments and community services which will take place could have been done years ago and would have saved lives, human hardship, and money, if not for the subtle racists.

I visited the George Floyd memorial while in Minneapolis a few days ago.  It is powerful and emotional.  Would George Floyd be alive today if our media personality had listened and learned from LeBron James or earlier Colin Kaepernick. The media personality and followers did not, but most of us can and will going forward and this is a good thing.