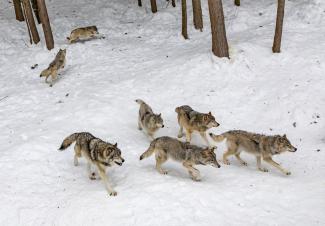 Recently, a friend of mine in Big Sky, Mt was in his back yard and looked up and to his surprise, a wolf walked by. Was he in any danger?  No.  From 1900-2000 there were zero reported deaths to humans in the US by wolves.  By comparison, 30-50 people are killed each year by dogs with a range of 6,000-13,000 people hospitalized annually due to dog bites.

My friend was very lucky to see a wolf.  This is for two reasons.  One, there are less than 6,000 wolves living in the bottom US 48 states.  Two, wolves were killed to almost their extinction by the early 1990s.  Things began to get better for the wolves beginning in 1973 with the passage of the Endangered Species Act in 1973 and subsequent listing of gray wolves on the endangered species list in 1978.  Since then, wolves have been making somewhat of a comeback.

But they are not out of the woods yet, no pun intended, [ok pun intended].  This is one of the reasons I have changed the stories I tell my grandchildren.

Though research has documented that wolves are an important part of a healthy ecosystem, there continue to be attempts to eradicate them.  Eradicate is a different word for killing them all.

If you do understand the importance of wolves to a healthy ecosystem, I invite you to watch two short YouTube videos. One is entitled "How Wolves Change Rivers" and the second is entitled "Wolves saved Yellowstone National Park - The Northern Range".  In an interesting informative manner, each video explains and documents how the reintroduction of wolves led to a healthy eco-system in the Park.  They are done in such a manner that even most members of State Legislators should be able to follow along without getting confused.

But State Legislators and Governors do seem to be confused about wolves and healthy ecosystems.

All of the above is consistent with a 2010 USDA study which found that with a National cattle inventory of about 94 million, the mortality was almost 4 million.  Of confirmed deaths, deaths from wolves were 8,100 [0.2%].  By comparison, deaths by dogs were 21,800 [0.5%] or well over twice as many.  Both are statistically insignificant compared to non-predatory causes of death.  At the same time, ranchers who share space and land with all types of predatory animals need to be compensated for their losses and perhaps even compensated for being on the front lines of protecting our ecosystem.

So, who is the big bad wolf today?  It’s state legislators and governors who ignore science and scientific research. They will not only decimate the wolf population but also damage a recovering ecosystem.  I would suggest this will ultimately affect tourism numbers and property values.  The reason?  What makes you smile and want to visit.  An elected official trapping and killing a wolf or hearing a story about seeing a wolf walk by.