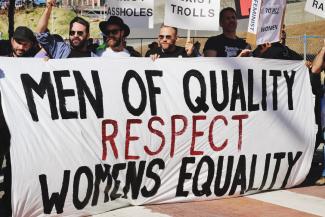 When I started college a long time ago in a far away place, freshmen males could come and go as they please but freshmen females had to be in their dorms by 9:00 pm weekdays and 10:00 pm on weekends.  The college, run by old white males, felt women needed to be protected.  Not sure from what, no one ever said.

During that time, many colleges and universities were allowing visitation between the various mens and women's dorms at anytime, my college allowed men to be in the women's dorms one afternoon a semester.  Doors were required to be open and all feet had to be on the floor at all times.  Two of my friends seriously wrenched their backs trying to abide by the rules and still be affectionate with their girlfriends.  Sadly, one football player missed the rest of the season after pulling a muscle.

My senior year, the theological department nominated me for a specific theological scholarship.  Not sure if it still exists, but as I recall over 2,000 students Nationwide were nominated at that time.  The paper I wrote must have been good as I made it to the semi-finals where again as I recall, there were about 200 of us left.  In the paper, I made three points.  One was the unfairness that prostitution was a crime for females who were often arrested, but their customers, men called johns, almost always had no criminal repercussions.    There is a crime there, but I would suggest is for the men who passed the laws.

A few months earlier, Roe vs Wade had just become the new law of the land and I wrote about this also.

Today, many in our country, female and male, are in shock with the release the SC is planning to overturn RoeVWade.  As I student of theology I knew abortion is never mentioned in the four Gospels.

As a novice student of Greek and Roman culture, I also knew that abortion was common in both cultures.  The Greek philosopher, Aristotle, who died in 322 BC wrote male fetus did not began to live until 40 days after conception and 90 days after conception for a female.  This perception continued for well over a thousand years.  Sexism has been around for a longtime.

St. Augustine, St. Thomas Aquinas along with many other theologians had views, sometimes differing, on abortion.  For example, St. Augustine, who died in 430 AD, declared that abortion is not homicide but was a sin if it was intended to conceal fornication or adultery.  St. Thomas Aquinas who died in 1274 said the fetus does not have a soul until after the "quickening" which used Aristotle's definition 40 days for a male and 80 days for a female.

Though I read commentaries using St Aquinas as a reference on both sides of RvW, what interested me is for well over a 1,000 years, it was an accepted belief that it takes an extra 40 days for females to develop a soul.  If these were the brightest minds of the their time periods, really hate to see what the dimmest thought and said.

What was consistent for well over 2,000 years was all the "teaching" was done my men.   I know, I am equally shocked.

Often the sanctity of life is cited by theologians.  I have to take this with a large grain of salt. The church was very good at allowing if not encouraging the killing of people who did not accept their religious beliefs.  The Inquisition was established in the late 1100s  by the catholic church to address heretics, most often Jews or Muslins who were tortured and normally burned at the stake.  Some historians believe the Spanish Inquisition alone was responsible for 32,000 deaths over some 200 years.

Another example is destruction of Catharism.  Long before the Protestantism Reformation, Catharism became a rival Christian church to the traditional church.  There were significant differences between Catharism and the traditional church.  One that was most interesting is women were considered equal to men and could preach and teach the same as men.  About 50% of the "perfecti" [their name for priests]  were women.  Well, the traditional church could not have that.  In the 1100s the traditional church declared Cathays as heretics and started a war against them which lead to a bloody violent crusade against Cathays in the early 1200s.  By the end of the 1200s, the religion was destroyed and some historians estimate up to one million Cathays, men women and children were put to death.

Why is all this relevant today.  Because for me, its all inter-connected.  What is interesting is the Gospels are very clear on children, they are blessed, poor people, they are blessed, and one's neighbor, to be loved unconditionally.  Some churches have done a good job on this over they years and others not so much.  Back to the issue at hand.  Though no one cares what I think, I would suggest RvW should continue to be the law of the land, either by the SC or Congress until four things have happened.

Once we have attained all four of the above, met the minimum requirements for a developed society , we can talk about the rest.