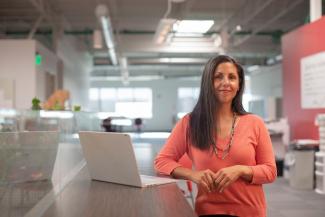 You work for a small company with about 120 employees and the owner/CEO calls an employee meeting and announces the minimum annual salary at the company would be increasing to $70,000.  Previously it had been $35,000.  What happens next.

3 is the correct answer as this really happened.  In 2015, CEO and founder Dan Price of Gravity Payments told his employees that going forward the minimum salary would be $70,000.  At that time, of the 120 employees, this doubled the salary of 30 employees and increased the salary of another 40.  To do this, among other things, he cut his million-dollar salary and downsized his residence.   His salary is now $70,000.  Of course, he owns the company so there is that.  Also, in 2016, as appreciation employees all pitched in and bought him a new Tesla.

But the story gets more interesting as experts and many non-experts thought this was a recipe for failure.  For example, one talk radio host said on air this was a move towards socialism.  I am not sure this talk show host could spell socialism not to mention understand it.  Anyway, here is what happened.  Sales increase, revenue increased, profits increased and employee retention increased.

The reason Price chose a minimum of $70,000 is because, after research, he determined this was the income level for employees to have a reasonable lifestyle and meet financial objectives.

As outlined above, rather than losing customers and employees, just the opposite happened.  However, some other interesting things also happened. According to an August 2021 article in the Insider online magazine, six years after the policy was implemented, the number of employees who became first-time homebuyers increased, employees were able to pay down on personal debt with about one-third of employees being debt-free.

Most interesting, prior to the new policy, the company had been averaging 0-2 births annually to over 65 new babies among staff members over the past six years.  The article did not discuss if the increase in births was because employees felt in a better financial position to have a baby or the reduced stress from higher earnings led to an increase in amorous activity which can also lead to having babies.  Could be a combination of both.

When the pandemic hit, like many companies, Gravity Payments had financial problems as they lose customers and gross revenues declined significantly. Rather than having company-wide mass layoffs, employees volunteered to take pay reductions. As the economy recovered, so did the company, and revenues are higher than ever.  Employees who took voluntary pay cuts were reimbursed for the income lost from the pay cut.

Another very important factor is in today's world when many companies are struggling with employee retention, Gravity Payments has a very high retention rate.  According to the article, when there is a vacancy, they have more than 300 applicants.

It is not possible to determine if this company's success will inspire other companies to do the same.  One reason is there are all types of companies out there with different products, services, and ongoing business challenges. Another reason is according to a study by the Economic Policy Institute, in 1990 CEO compensation was about 71 times more than the typical worker.  Now CEO compensation is 320 times the salary of a typical worker. According to the same study, CEO compensation grew by 1,322% from 1978 to 2020.  By comparison, typical worker compensation increased by about 18%.  [Both are adjusted for inflation.].  It’s been my experience from years of observation, though there are exceptions, generally when CEOs talk about sacrifice for the company, they are not talking about themselves.

So, what does this mean other than generally, it is good to be a CEO?  If you are an employee with skills and demand in the marketplace, pick your employer carefully. There are other companies like Gravity Payments out there.

I would also suggest it is a community's best interest to attract businesses that compensate their employees fairly. Think about it this way.  The owner/CEO of Gravity Payments is still making money.  In addition to his salary and other business perks, he is receiving the company's profits.  So, he is contributing to the community.  And his employees with their increased compensation are buying houses, paying off debt which increases cash flow for discretionary spending, having growing families, and contributing to the tax base.  All are good for the community.

We are in a new normal in many ways.  Historically many companies looked at employees in an adversarial manner.  The more employees worked and less they were paid, the better it was for the bottom line and company productivity.  But is that really true and does it make sense going forward?  To grow and be competitive going forward, I would suggest more companies will need to follow Gravity Payment's lead.  This strategy not only benefits company employees which increases company loyalty and retention but also benefits the communities in which these employees live.

Finally, if you are retired and think this does not apply to you.  Think again.  Employees now pay FICA taxes on the first $142,800 of earned income.  FICA funds your social security benefits.  Increased earnings for workers benefits social security stability.